Shuumatsu no Valkyrie: Record of Ragnarok Wiki
Register
Don't have an account?
Sign In
Advertisement
in: Characters, Males, Fighters,
and 4 more
English

Edit
watch 01:32
She-Hulk Trailer Dropped - The Loop
Do you like this video?
Play Sound

Hajun is the legendary berserker of the Netherworld and the Demon Lord of the Sixth Heaven (第六天魔王, Dairoku Tenmaō).

Previously the God of Misfortune, Zerofuku, Hajun appeared when Zerofuku was devoured by two dragons, taking his place in the sixth round of Ragnarok.

Hajun is very sinister and demonic in appearance, having an extremely tall and muscular physique with long licac hair, deep black eyes with similarly white pupils, black tattoo lines on his face, two gigantic red buffalo-shaped horns protruding from each side of his head, muscles and several spike-like seemingly bones protruding from his forearms and his shoulders. Similar to Zerofuku, he has a prominent hole marking on the left side his chest but it spreads to his neck and abdomen. Hajun wears a giant patterned loincloth similar to the mawashi. 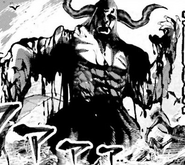 Hajun's appearance when he attacked the Underworld 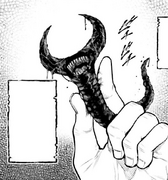 Despite his demonic appearance, Hajun is shown to be quite calm, relaxed and eager, being humble yet confident about his power, and the abilities of others as shown when he was surprised after Buddha blocked his first attack. After managing to slash out Buddha's eye, he showed a more unexpected side of him, which is his sadism and arrogance, making fun of Buddha once his attack landed. Hajun is very arrogant, often calling himself the most supreme being. He also appears to have a habit of saying "Divine Retribution".

At the end of the fight, Hajun showed a desire to surpass his older self, who was weak, and feared challenging someone who didn't fear him back and looked down upon.

Overall Abilities: Hajun is probably the most powerful demon in existence. He can destroy stones just with his shock waves. He was even able to destroy half of Helheim and almost defeated Buddha. His strength was so enormous that at some point, his own body could not contain his immense power, breaking down and killing him in the process.

Demonic Speed & Reflexes: Hajun possesses immense speed and reflexes, Göll stated that his speed was insane. He was able to dodge and block most of Buddha's attacks, which were moving at blinding speeds.

Demonic Durability: Hajun is extremely resilient. The weapons made out of his own body have been shown to be quite durable, being capable of competing with and surpassing Divine Weapons. Hajun can also harden certain parts of his body, such as his arm, in order to block attacks more effectively.

Demonic Endurance & Stamina: Hajun possesses immense endurance and stamina. He was capable of amputating his own arm without showing any signs of pain. In the past, he once destroyed half of Helheim, a feat that likely took days and perhaps even years in order to be realized, requiring enormous amounts of stamina in order to be performed. Even after being bisected by Buddha, Hajun was still able to stay conscious and make one last attack before dying.

Expert Combatant: Hajun is a very talented combatant. He is capable of competing with Buddha and defeat many demons in the Underworld. His fighting style is very unusual, using a great variety of weapons, made from his own flesh. He is also a very skilled swordsman and can easily dodge and block most attacks, despite his huge frame.

Biokinesis: Similar to Zerofuku, Hajun possesses the ability to manipulate his own body and flesh with extreme precision. He can manipulate his blood and turn it into a gigantic loincloth, even shaping it to have various colors and patterns. When in combat, Hajun can shape his limbs into a variety of melee weapons, including: a great sword[1], a scythe, a whip sword, and an axe. He also displayed the ability to harden certain parts of his body, such as his arm. However, this ability is not powerful enough to completely block some attacks, such as Buddha's Karma-Destroying Samsara Cycle: Eternal, since this technique was capable of wounding him.[2][3]

Black Soul: Hajun' soul is covered by a veil of darkness, making him immune to Buddha's Pure Enlightenment Eighth Consciousness. However, if his soul starts to tremble with fear the veil of darkness will be unable to cover the light of his soul, allowing Buddha to predict his movements.