Shuumatsu no Valkyrie: Record of Ragnarok Wiki
Register
Don't have an account?
Sign In
Advertisement
in: Characters, Males, Humans,
and 3 more
English

Jack the Ripper is Humanity's representative in the fourth round of Ragnarok, going up against Heracles.

Jack is a serial killer hailing from late 19th century Britain and is a very important figure in the history of London, being considered "Humanity's Most Infamous Serial Killer" (人類史上最も著名な殺人鬼, Jinrui Shijō Mottomo Chomeina Satsujinki).

Jack takes the form of an adult man of average height with silver hair and a silver mustache. Jack also has heterochromatic eyes, with a left eye that is silver in color and a right eye that is deep red in color, the latter being covered by a monocle filled with gears. He also wears a gray Victorian Era formal suit with a white shirt underneath and a blood red steampunk top hat. Jack also wears blood red trousers, a blood red coat over his suit and a pair of black gloves. 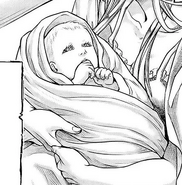 The future Jack the Ripper as a baby

The future Jack the Ripper as a young boy

Normally, Jack has the disposition of a typical British gentlemen, accentuated by his sophisticated diction and actions.

However, underneath this polite and distinguished façade, Jack is a cold-blooded monster at heart as he gleeful murders people simply to bask in the sight of his victim's fear as they come face-to-face with death, even going as far as to describe the color as "absolutely beautiful".

Later on it's revealed that much of Jack's twisted, cruel, and sadistic nature comes from a traumatic childhood experience where, upon discovering that his mother never truly loved him and only saw him as a tool for her to get out of poverty, he broke down mentally and eventually spiraled until he became the ruthless killer he is today.

However, after his fight with Heracles and later meeting with Göll, Jack seems to have shown a desire to change and move on, as well as a want to meet someone who truly loves him. Also, despite his ability to see the true feelings of those around him, Jack has demonstrated an inability to recognize his own, even requiring Hlökk to tell him that he felt sad about killing Heracles.

Overall Abilities: Jack the Ripper is a master assassin and combatant who prefers to win through genius tactics rather than raw power. In battle, Jack is willing to use any means necessary to take down his prey, using his warped and creative mind to come up with a plan of action so as to kill is targets as efficiently and sadistically as possible. By using any and all items available to him, Jack can adapt effortlessly to his surroundings, quickly setting up complex traps and improvising to fool his opponent even when in the heat of battle.[1]

Godlike Strength: Despite possibly being the weakest of the Einherjar when it comes to physical strength, Jack still is far more powerful than the average human being. He was able to overpower the Valkyrie and demigoddess Hlökk, rip off and throw the clockface of the Big Ben and even briefly trade blows with the likes of Heracles.

Godlike Speed & Reflexes: Being an expert assassin and talented killer, Jack can move at superhuman speeds, although not at the same caliber as individuals like Adam or Kojiro Sasaki. Despite that, he was still able to keep up with the extremely swift attacks from Heracles.

Godlike Durability: Despite being just a mortal, Jack was able to take multiple hits from Heracles, who's been stated to possess a caliber of strength on par with Zeus himself, and survive, however, he was heavily injured in the process.

Godlike Endurance & Stamina: Jack has displayed incredible endurance and stamina, able to keep up with the God of Fortitude himself without showing any signs of fatigue, even after receiving multiple injuries he was still able to keep fighting.

Strong Willpower: Jack the Ripper has displayed immense willpower, to the point that even Heracles himself praised his determination. Even after taking multiple hits from the God of Fortitude, Jack still remained determined to defeat his opponent always thinking of new plans in order to win. Jack was even willing to impale himself in order to gain an advantage in the fight.

Tactical Intellect: Jack is an expert tactician, being able to outsmart Heracles and the Gods and think on his feet, as shown when he used the urban environment to his advantage, fleeing into a dark alleyway and setting up traps.[4] He is also very crafty, as he was able to distract Heracles with the use of manmade weapons and traps along with hit-and-run tactics.[5] Jack was also able to catch Heracles off guard multiple times[6] and was even able to fool him twice with his fake Völundrs to make the hero lower his guard.[7] With the help of his emotion sensing eye, Jack can manipulate and trick people easily, by seeing their emotions and how they change based on his actions.

Stealth Master: When he was still an active serial killer in London, Jack was able to elude capture and always remain one step ahead, despite the whole of London's police force searching for him. While fighting Heracles in the fourth round, Jack was able to quickly set up traps and footing beforehand without being seen by the cameras or his opponent.

When he was alive on Earth, Jack killed multiple people without the police ever knowing about them, causing them to never be recorded in the pages of history. He was also capable of approaching Hlökk without her even noticing his presence.

Weapons Master: Jack is shown to be proficient in many forms of weaponry, conventional or otherwise, even using the objects in his surroundings as weapons and still keep up with Heracles. The weapons he has used in the battle against the God include a giant scissor, piano wires, knives, an umbrella, a sharp fence, a door,[8] the face of Big Ben and finally, a grappling hook.

Golden Age: As a Human soul in the afterlife, Jack possesses the appearance and skills that he did at his peak.

Soul Eye:[12] A unique power that he's possessed since birth, Jack's right eye possesses the ability to see people's emotions as colors. By looking into a person's "soul", Jack can discern their real intentions by even the slightest change in color. During his killing spree, Jack used his right eye to see the true colors of anyone he saw in order to kill or evade, which might be the actual reason why he was able to escape the police force. When combined with his intellect, Jack can easily manipulate people to do as he pleases, this was best shown by him forcing a Völundr with a Valkyrie by manipulating her emotions and making them "match their wavelengths".

However, this ability is not without it's weaknesses, since it's heavily implied that Jack cannot use his ability on himself. Another flaw is that, while he may be able to see people's actual emotions, it doesn't mean he'll truly understand them, as seen when he confused his mother's love for his father as being the love she had for him.