Shuumatsu no Valkyrie: Record of Ragnarok Wiki
Register
Don't have an account?
Sign In
Advertisement
in: Characters, Males, Humans,
and 3 more
English

Edit
watch 01:32
She-Hulk Trailer Dropped - The Loop
Do you like this video?
Play Sound

The King Where It All Began

Qin Shi Huang is Humanity's representative in the seventh round of Ragnarok, going up against Hades. He's the founder of the Qin Dynasty and the first Emperor to unify China.

He is widely regarded as the greatest Chinese Emperor of all time, despite sometimes being viewed as a tyrant. He is known as "The King Where It All Began" (始まりの王, Hajimari no Ō) and has been called the "King of Men" (人の王, Hito no Ō) during his battle with Hades.

Qin Shi Huang is a man of average stature; comparable to Jack the Ripper in overall body composition. He has a muscular build along with broad shoulders.

Qin Shi Huang wears an intricate bare-shouldered robe, resembling ones worn by Chinese Empresses. He also wears a blindfold decorated with a patterned streak that covers his eyes.

He has two tattoos of centipede: The first on his right cheek, going downward vertically from his right eye, which is covered by the blindfold; and the other on his back. 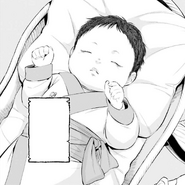 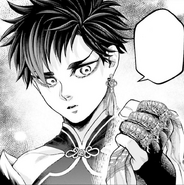 He seems to be extremely confident in himself, seeing as how he walked into the Gods' area and sat down in Hades' chair (although he did this due to being clueless as to where his waiting room was).

He's also extremely proud of his rank as Emperor, to the point of brazenly ordering Ares and Hermes to kneel before him and show respect. Qin Shi Huang is also quite fearless and daring, attacking Ares without being afraid of the God and still ignoring him as if he were nothing.

As a kid, he often sported a forced, unnatural smile to hide the hatred and misery he was feeling due to all the mistreatment he suffered when he was a hostage in Zhao, which led to people thinking of him as a "creepy child". However, upon meeting Chun Yan (who took on the role as his mother figure), he started to eventually learn how to smile genuinely.

Overall Abilities: Qin Shi Huang is probably the most powerful Emperor in mankind's history as he was able to defeat the Demon God, Chiyou as well as fight on par with and overwhelm the King of the Netherworld, Hades.

Godly Strength:[2] Qin Shi Huang was able to destroy multiple corridor walls of the Valhalla Arena with ease as well as overwhelm even the likes of Hades, who boasted great physical strength himself.

Godly Speed & Reflexes: Qin Shi Huang can move at speeds matching the likes of Gods, as shown in his fight against Hades; not only could Qin keep up with his countless afterimages and blinding speeds, but eventually managed to outmaneuver him.

Godly Stamina & Endurance: Qin Shi Huang possesses a nearly limitless degree physical and mental fortitude. Due to his unique form of Mirror Touch Synesthesia, he was forced to feel the physical and mental pain of others for almost his entire life and yet, despite that, he was to keep on smiling without so much as a hint he was suffering, even when a chunk of his flesh was torn out. His incredible tenacity was further demonstrated by him being able to battle against Chiyou for six whole days without displaying any signs of exhaustion or fatigue.

Martial Arts Expert: Qin Shi Huang is a very skilled martial artist as, during his confrontation with Chiyou, he managed to create and master his own style of martial arts which he derived from five other fighting styles he learned from his adoptive mother, Chun Yan. With it, Qin Shi Huang has access to a great variety of techniques that he can use in order to gain an advantage over his opponents.

Golden Age: As a soul in the afterlife, Qin Shi Huang possesses the same appearance and skills that he did when he was at his peak.

Qi Sight: Qin Shi Huang can see the flow of Qi within the bodies of living beings. Along these pathways are cruxes in the form of stars which Qin can strike to disrupt his opponent's Qi, thereby weakening their techniques. Qin Shi Huang awakened this ability after surviving countless battles with his Mirror Touch Synesthesia.

Mirror Touch Synesthesia: Born with this condition, whenever Qin Shi Huang saw a person be injured, he would receive the same injury by inverted. Due to constantly being exposed to hatred, Qin Shi Huang's Mirror Touch Synesthesia eventually ascended beyond the human level, reaching the point where he'd become injured simply from people's negative emotions which appeared on his body like burn marks.

Enhanced Sight: Despite constantly wearing a piece of cloth over his eyes, Qin Shi Huang has no trouble fighting even with his vision partially obscured. When his eyes are not covered, he is capable of seeing the Qi flow of his opponents.